I’m a longhand kind of writer. I love the feel of a pen in my hand, watching my thoughts manifest into ink as it sinks into the paper. The sound of the stroke of the ballpoint that swooshes, and leaves behind a trail words that sum up the feelings and observations of the moment thrills me.

Ever on the quest to digitize my analog life, I’m planning to publish my first e-book near the end of the month. It’s an essay with pictures, or a pictorial essay, if that’s a more marketable term, about my experience during the L.A. Riots, 25 years ago. The other day I was stressed out over formatting the photos, so I left the house with journal in hand and decided to go the beach.

I know that when I get inspired to go the beach, it’s a time for cleansing. Whenever a major change is coming along, I feel I have to count my blessings and clear my thoughts. I wanted to free my mind of the anxiety I was feeling from the pressures of perfection and just write something… anything. I found out that thoughts never come in any specific order unless you force them. They are as random as the waves hitting the shore, yet they do so with an expectant frequency. Here’s a random thought that hit the shores of my mind…

I’m at war with myself again. Trying to regain the sense of reality I sought in my youth. The ways of the world have had their way with me far too long. I felt alone in my quest before, but I’m more alone being a part of the crowd. It’s not easy journeying internally and finding the blocks that bar the way to true freedom, the freedom to live a life in love with myself. The freedom to be fearless in the face of adversity, to take the high road, takes more courage than lying to myself saying I just can’t take it anymore. I am stronger than the weakest perceptions I create, which tell me that this is as far as I’ll ever go. I’ve got to take chances. I’ve got to win this battle…

Someone recently told me that you have to fight for your right to write. I forced myself to come out here just to write this, even though I had no idea that this is what would come out of me. I always feel like these moments of reflection come too late to make any difference, but I’m grateful because it’s like taking a huge stretch before a workout. Here, in this moment, anything can happen, and if I write about it, it must be important, I think, because randomness can inevitably have meaning. Four more motorcycles just zoomed by.  A red Lamborghini. Another motorcycle, no two. A man holding a fake hand in one hand and a fat cigar in the other crosses the street. An airplane disappears into the clouds. What’s the meaning? It happened. 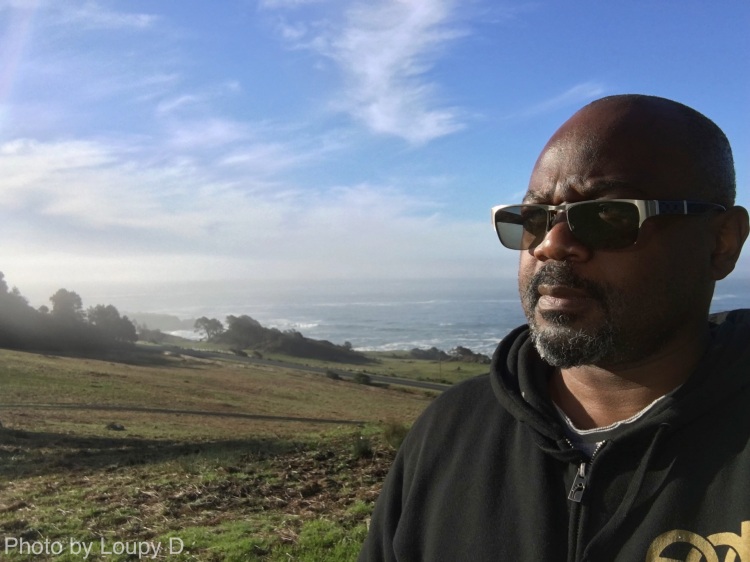 Lawrence Evan Dotson was born in Los Angeles, California. He decided early in life that he wanted to tell stories. He was a character who could entertain his two older sisters by staging his own version of a church radio broadcast that they would listen to on Sunday nights. His desire to perform followed him through grade school, and in his senior year of high school, a UCLA professor scouted and urged Lawrence to major in theater. Lawrence felt convicted to follow in the footsteps of his father, so instead of declaring Theater Arts as a freshman, he went in undeclared to sit out for a spot in the highly competitive Engineering Department. It only took one calculus class to convince Lawrence that Theater Arts was his calling and that he was going to achieve his goal of being recognized for his talents. While attending UCLA, he combined his interests in art and music and was one of the founders of the UCLA Jazz and Reggae Festival. He was on the Student Committee for the Arts, which put on the Jazz at the Wadsworth Series in conjunction with KKGO FM. Lawrence became more aware of social justice issues affecting the African American community on campus and became active in organizations that promoted positive change. He collaborated with students from other majors and formed the African Theater Collective, which promoted and produced plays from the African Diaspora. That action inspired a performance protest demanding the hiring of more black professors in the Theater Department, and tenure for longtime Professor, Dr. Beverly J. Robinson. The performance was based upon the subject matter that Dr. Robinson taught: the procession of the Black Theater experience in America as depicted through the development of the African slave from the plantations, to the pulpit, to the stage. Blessed with a wealth of knowledge and a rich experience from the University, Lawrence graduated and landed a job as an actor with University Express, an outreach program managed by a former student of Dr. Robinson. The troupe performed plays at Middle and High Schools that stressed the importance of continuing education. The job allowed him enough time to go on auditions, but after a year Lawrence burnt out on the acting treadmill. He met an editor for an underground Hip Hop magazine called No Sellout in 1991. Lawrence had his first article published in the second issue, an interview with L.A. DJ Michael Mixxin Moor. Lawrence began writing under “Loupy D”, coined from a childhood nickname. He wrote articles, reviews and commentary, and conducted interviews with some of Hip Hop’s top entertainers like The Notorious BIG, Wu Tang Clan, Erykah Badu and many others until 2003. In 2015, he earned an MFA in Creative Writing, after submitting a draft of a memoir based on his experiences growing up in post-Civil Rights Era Los Angeles. He's published an academic article, “Persona in Progression: A Look At Creative Nonfiction Literature In Civil Rights and Rap,” in Assay: A Journal of Nonfiction Studies. He also served a brief stint as the music editor for the online writing journal Drunk Monkeys. In between writing stints, Lawrence has and continues to be an avid amateur photographer and independent film professional. He will be releasing books and videos of his work over time, just as soon as he figures out how to balance work life with the life of single parenting two sons.

View all of Loupy D's posts.