Hey. I’ve been absent for a while. April was a month of fluctuations and adjustments. I had to get used to someone sleeping on my couch for one. I had a couple of house guests last month at different times. The first was my pregnant friend from Joshua Tree who stayed with me while the AWP Conference was in town at the start of the month. For a woman with a torn abdomen and a broken pinky toe – AND 8 months preggers – she could move around!

We had an adventure riding the Metro Expo Line from downtown, where we discovered that the benches had been removed from the underground station at Pershing Square. My guess was that it was so the homeless would have no comfortable place to sleep out of the elements. We had been on our feet almost the entire day since 10 AM. It was 10 PM when we made the discovery that we would be standing at least another half hour, as we waited for our train to arrive at its Sunday night scheduled time. I was glad that we went to a yoga workshop in the afternoon, or else our attitudes and our spirits would not have been appreciative of all the information about publishing, writing and networking we gleaned from our excursion.
When we got back to my apartment, we were starving. It was a chance for me to practice my vegan cooking skills. I made cornbread for the first time with no egg. She even had the nerve to put me on blast on Facebook, for making something so delicious! 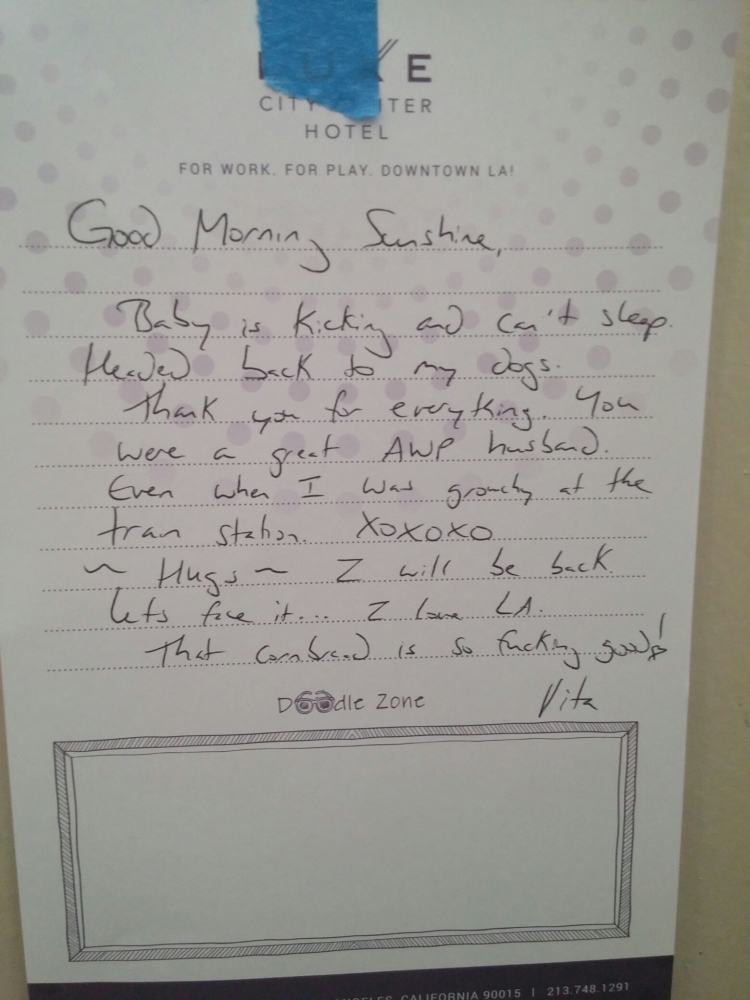 House guest number two was an ex-flame who was in transition moving from one living situation to another. It was then that I learned about the new recent ex-boyfriend that she got with after me. She and I remained friends after our “situation,” but she never mentioned the new guy in any of our conversations over the phone or in person. I do remember that we were kind of out of touch between the holiday season last winter and her birthday in February. I knew that she was planning a trip to Florida for that occasion with her girls. While she was staying with me, she showed me pics of her in the club and just hanging out, and then she showed me pics of her in the Bahamas having a great time. 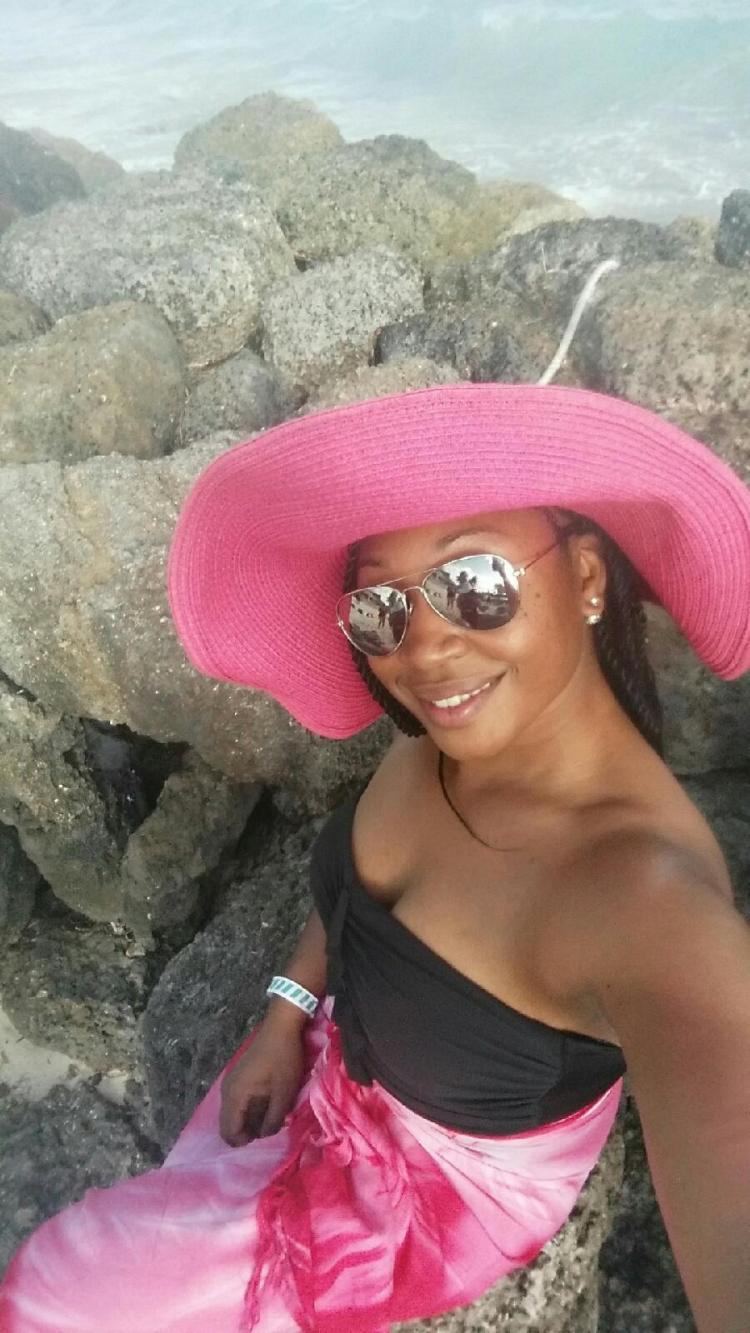 “Oh yeah, that was a special surprise that I didn’t expect,” she told me. I could only guess that it was a gift from the new guy. And now there she was, couch surfing in my living room, caught between situations.
After a week I helped her move into her new place: a room in a house not far from me. When she left she said that now that she’s closer, that we could spend more time together, as friends of course. Of course. I wouldn’t stand for being involved in another “situationship.”

All said and done, I’m glad May has arrived. In just about an hour, I’m poised to be a guest on another radio show, this time talking about the writing craft. I hope May brings the flowers that April showers promise, but the weathermen promised El Niño this year too, and I was dreadfully disappointed. I appreciated the few drenchings we got in this portion of Southern Cali. I just hope that it was enough to irrigate my mind and allow some creativity to sprout from this fertile brain.

Catch me on KPFT.ORG/LISTEN today at 11am PDT.

Lawrence Evan Dotson was born in Los Angeles, California. He decided early in life that he wanted to tell stories. He was a character who could entertain his two older sisters by staging his own version of a church radio broadcast that they would listen to on Sunday nights. His desire to perform followed him through grade school, and in his senior year of high school, a UCLA professor scouted and urged Lawrence to major in theater. Lawrence felt convicted to follow in the footsteps of his father, so instead of declaring Theater Arts as a freshman, he went in undeclared to sit out for a spot in the highly competitive Engineering Department. It only took one calculus class to convince Lawrence that Theater Arts was his calling and that he was going to achieve his goal of being recognized for his talents. While attending UCLA, he combined his interests in art and music and was one of the founders of the UCLA Jazz and Reggae Festival. He was on the Student Committee for the Arts, which put on the Jazz at the Wadsworth Series in conjunction with KKGO FM. Lawrence became more aware of social justice issues affecting the African American community on campus and became active in organizations that promoted positive change. He collaborated with students from other majors and formed the African Theater Collective, which promoted and produced plays from the African Diaspora. That action inspired a performance protest demanding the hiring of more black professors in the Theater Department, and tenure for longtime Professor, Dr. Beverly J. Robinson. The performance was based upon the subject matter that Dr. Robinson taught: the procession of the Black Theater experience in America as depicted through the development of the African slave from the plantations, to the pulpit, to the stage. Blessed with a wealth of knowledge and a rich experience from the University, Lawrence graduated and landed a job as an actor with University Express, an outreach program managed by a former student of Dr. Robinson. The troupe performed plays at Middle and High Schools that stressed the importance of continuing education. The job allowed him enough time to go on auditions, but after a year Lawrence burnt out on the acting treadmill. He met an editor for an underground Hip Hop magazine called No Sellout in 1991. Lawrence had his first article published in the second issue, an interview with L.A. DJ Michael Mixxin Moor. Lawrence began writing under “Loupy D”, coined from a childhood nickname. He wrote articles, reviews and commentary, and conducted interviews with some of Hip Hop’s top entertainers like The Notorious BIG, Wu Tang Clan, Erykah Badu and many others until 2003. In 2015, he earned an MFA in Creative Writing, after submitting a draft of a memoir based on his experiences growing up in post-Civil Rights Era Los Angeles. He's published an academic article, “Persona in Progression: A Look At Creative Nonfiction Literature In Civil Rights and Rap,” in Assay: A Journal of Nonfiction Studies. He also served a brief stint as the music editor for the online writing journal Drunk Monkeys. In between writing stints, Lawrence has and continues to be an avid amateur photographer and independent film professional. He will be releasing books and videos of his work over time, just as soon as he figures out how to balance work life with the life of single parenting two sons.

View all of Loupy D's posts.